Blog
You are here: Home / Blog / Accident / Pedestrian Accident / Let Your Eyes Deceive You: You Could Be Safer

Illusion has long played a role in art and cinema, but now a town in Iceland is using 3-D paint to improve local traffic safety.

Last October the small fishing village of Ísafjörður painted a pedestrian crosswalk illusion on a narrow street. To approaching drivers, they look like a set of above-ground barrier-bars capable of tearing up the vehicle’s undercarriage, so the motorist automatically slows down.

This creative zebra crossing has had such a positive impact on local traffic speeds that town officials are thinking about rolling it out in other areas of the village. It looks like a skillful and strategic paint job may be able to do what other road safety measures struggle to achieve: make intersections safer for vehicles and pedestrians alike.

Last September, the Maine Bureau of Highway Safety confirmed that traffic deaths throughout the state reached 101 for 2017, up from 88 over the same period last year. This data only covered the period up until September 1, so it did not include the Labor Day weekend, Thanksgiving, and the December holidays, all of which are statistically deadly times to be on the road.

Distracted driving is a leading factor in this growing number of traffic accidents. According to the Maine Department of Transportation, in 2016 an estimated 750 drivers were involved in collisions attributable to cell phone or electronic device use. That same year, over 100 people were killed every day in vehicle-related accidents, the first time the country experienced such a high fatality rate in over a decade. Coincidentally, between 2014 and 2016 the number of people who owned a smartphone rose from 75 to 81%.

So are Pedestrian Fatalities

Last November, the Department of Transportation confirmed that up to that point in 2017, more pedestrians had been struck and killed by motor vehicles than in any year since 1994. There had been 18 deaths so far, surpassing the 17 reported in 2016, making it a historically dangerous time for pedestrians.

In 2015 the most dangerous intersections for motor vehicles in Lewiston were East Avenue and Sabattus Street and Lisbon Street and South Avenue, both of which reported 17 accidents that year. For pedestrians and cyclists, the danger zones were Main and Bates Street (five crashes) and Main at Sabattus Street (four crashes). How can a painted crosswalk like the one in Iceland make a difference?

Let’s take a look at how these illusion-barriers would look at our most perilous intersections. 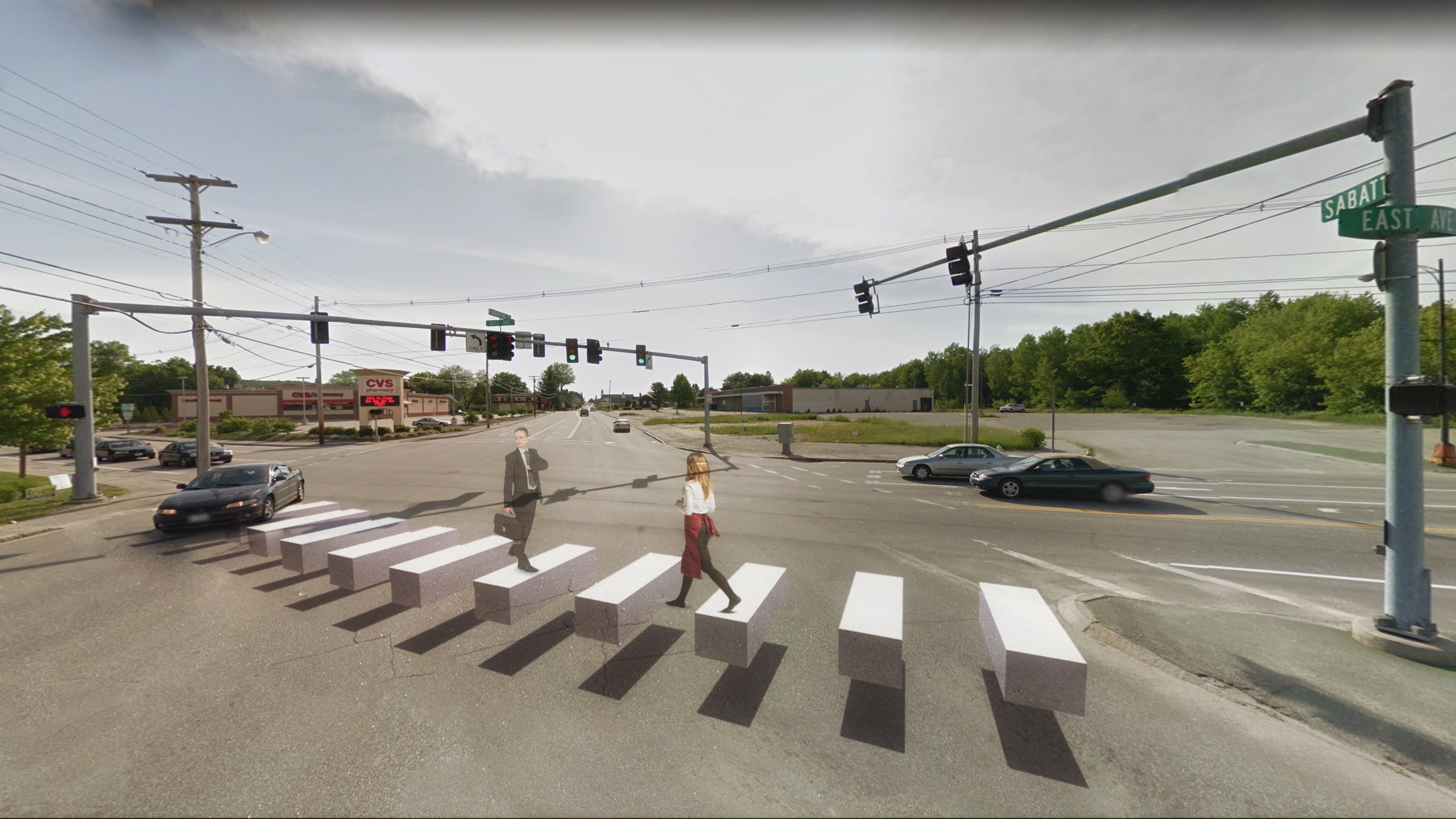 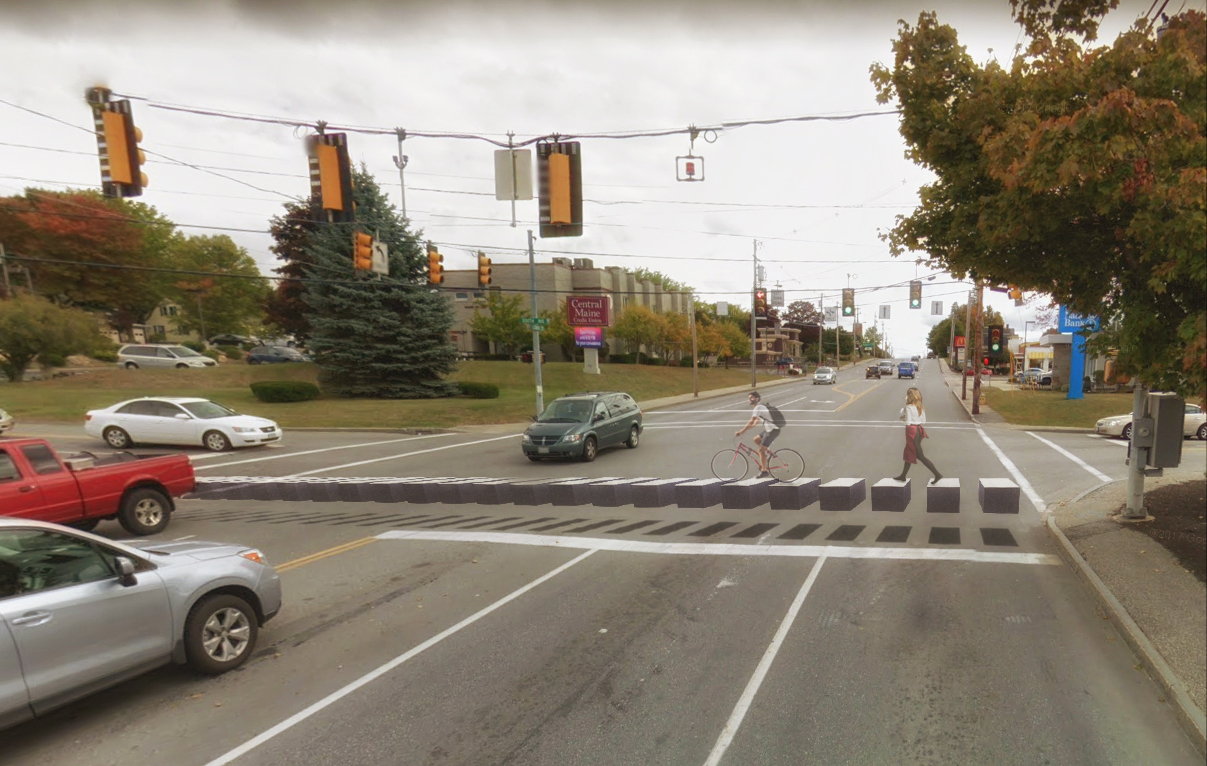 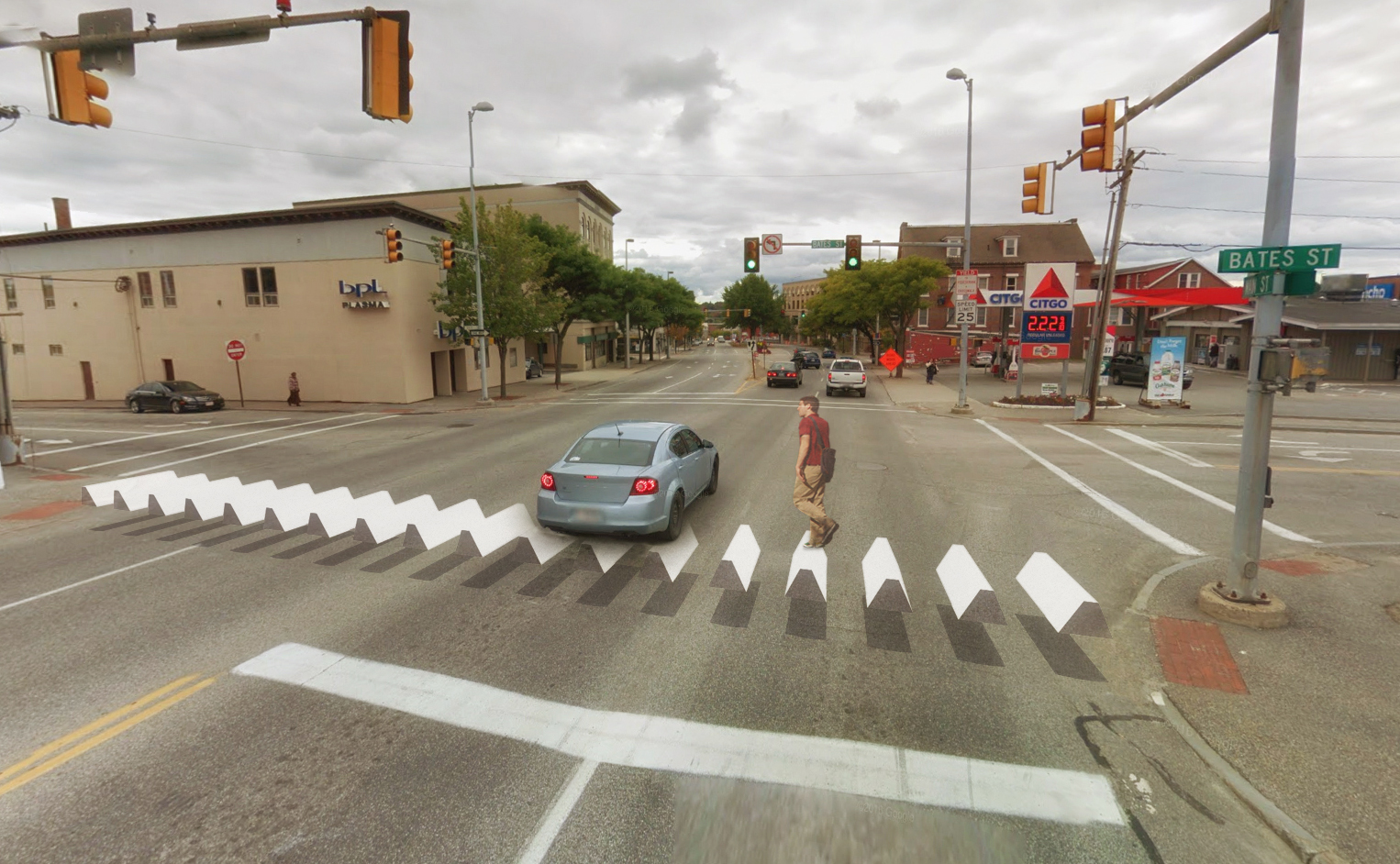 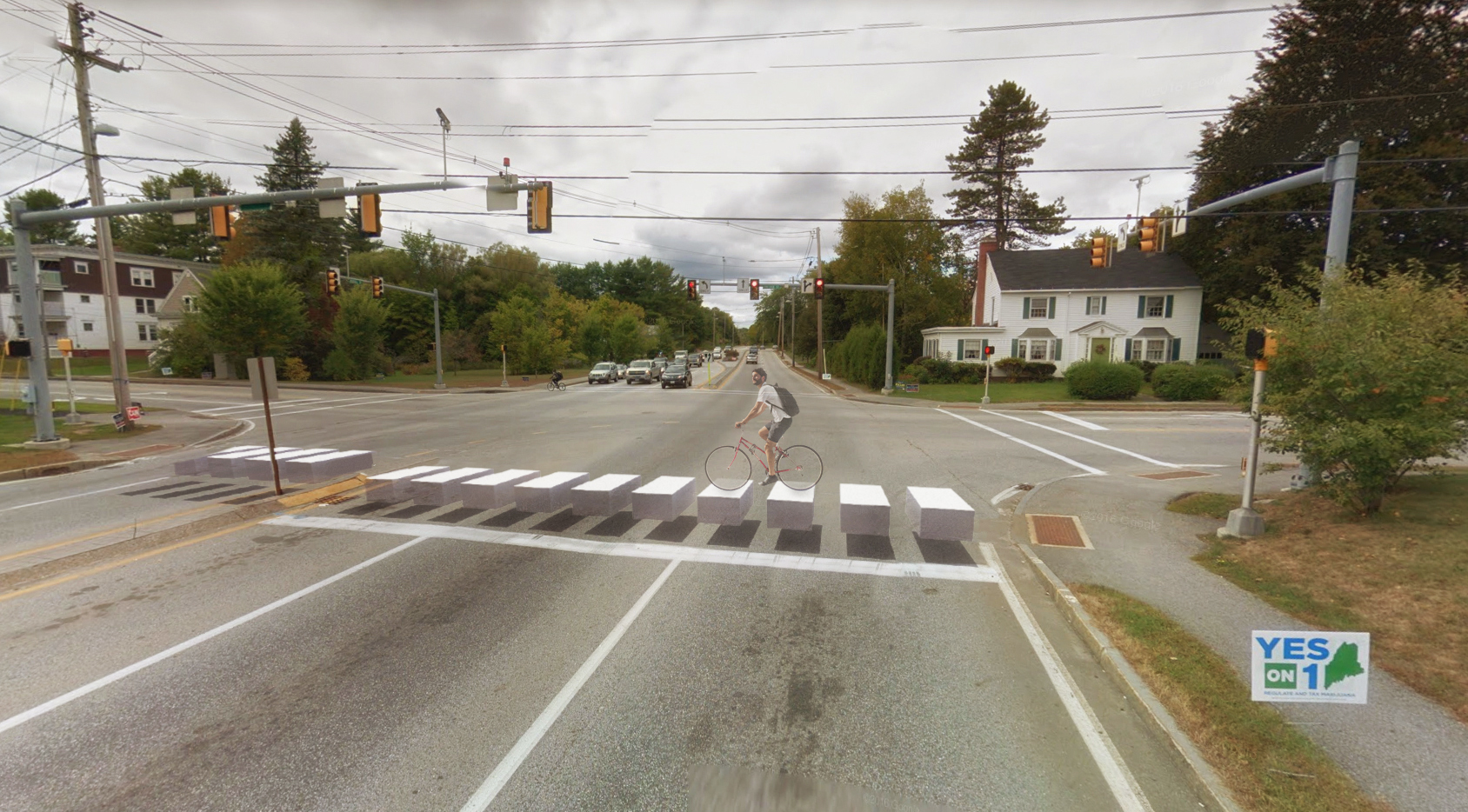 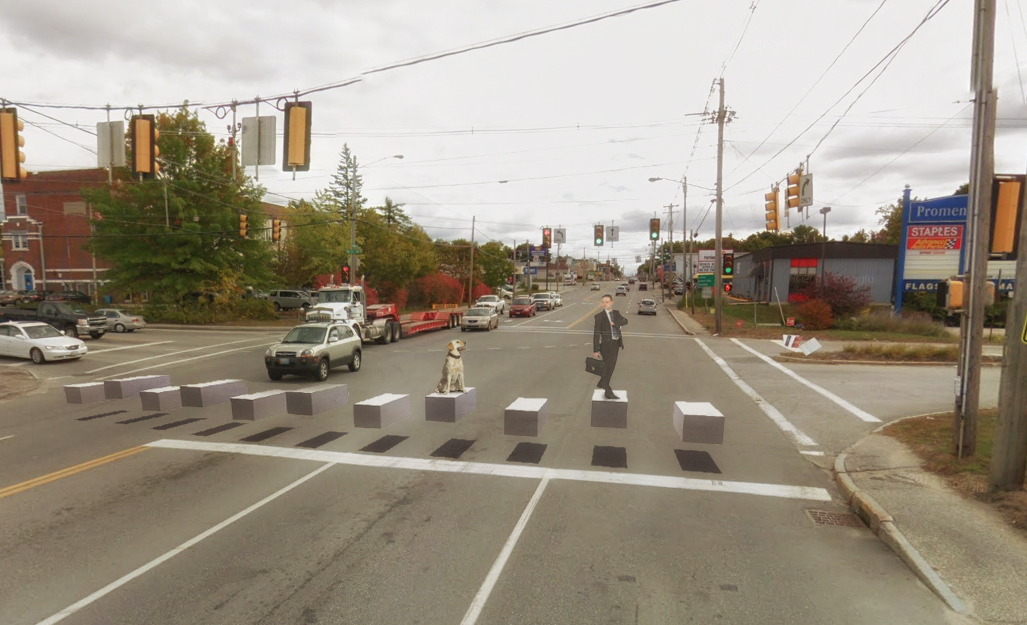 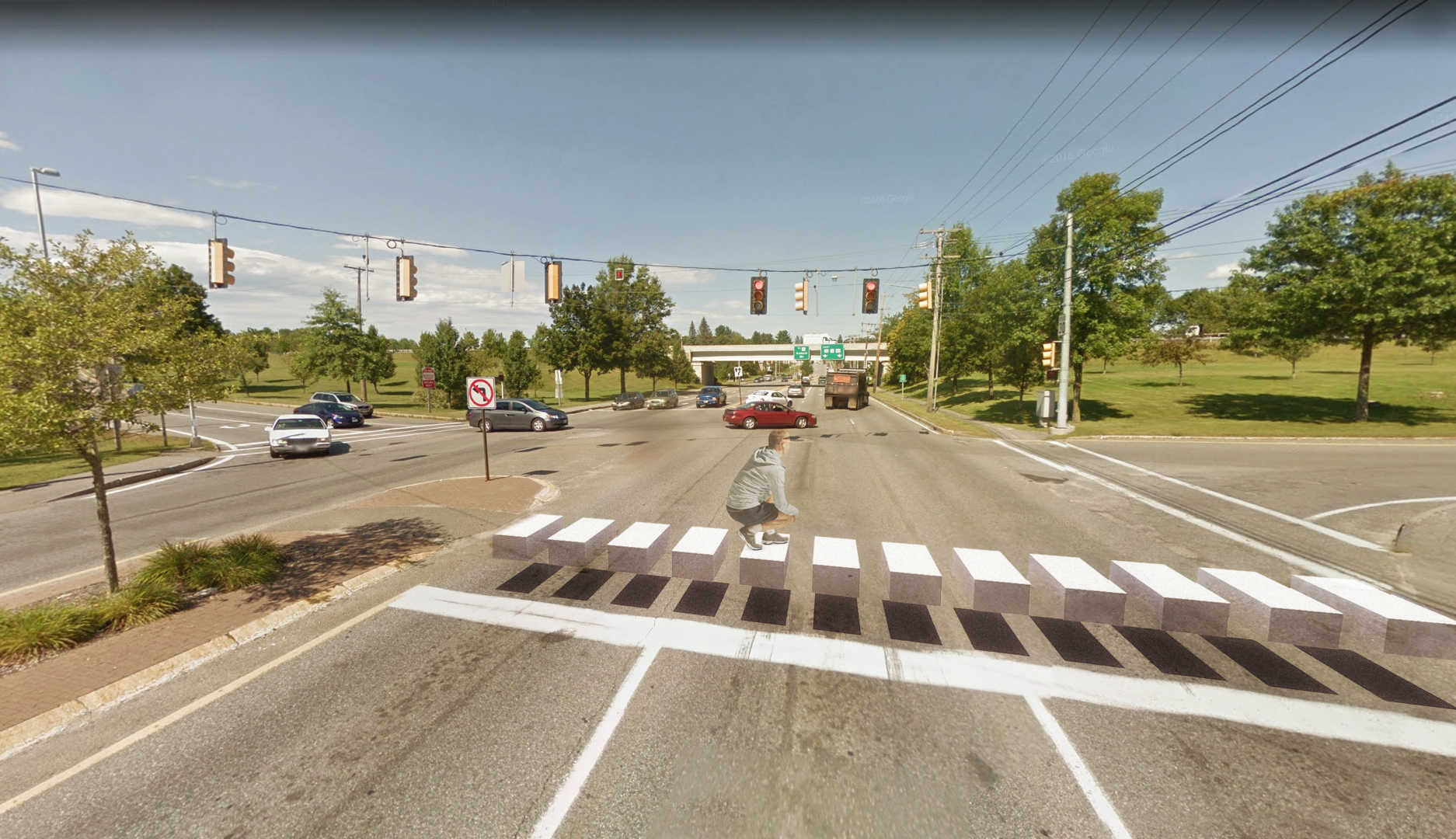 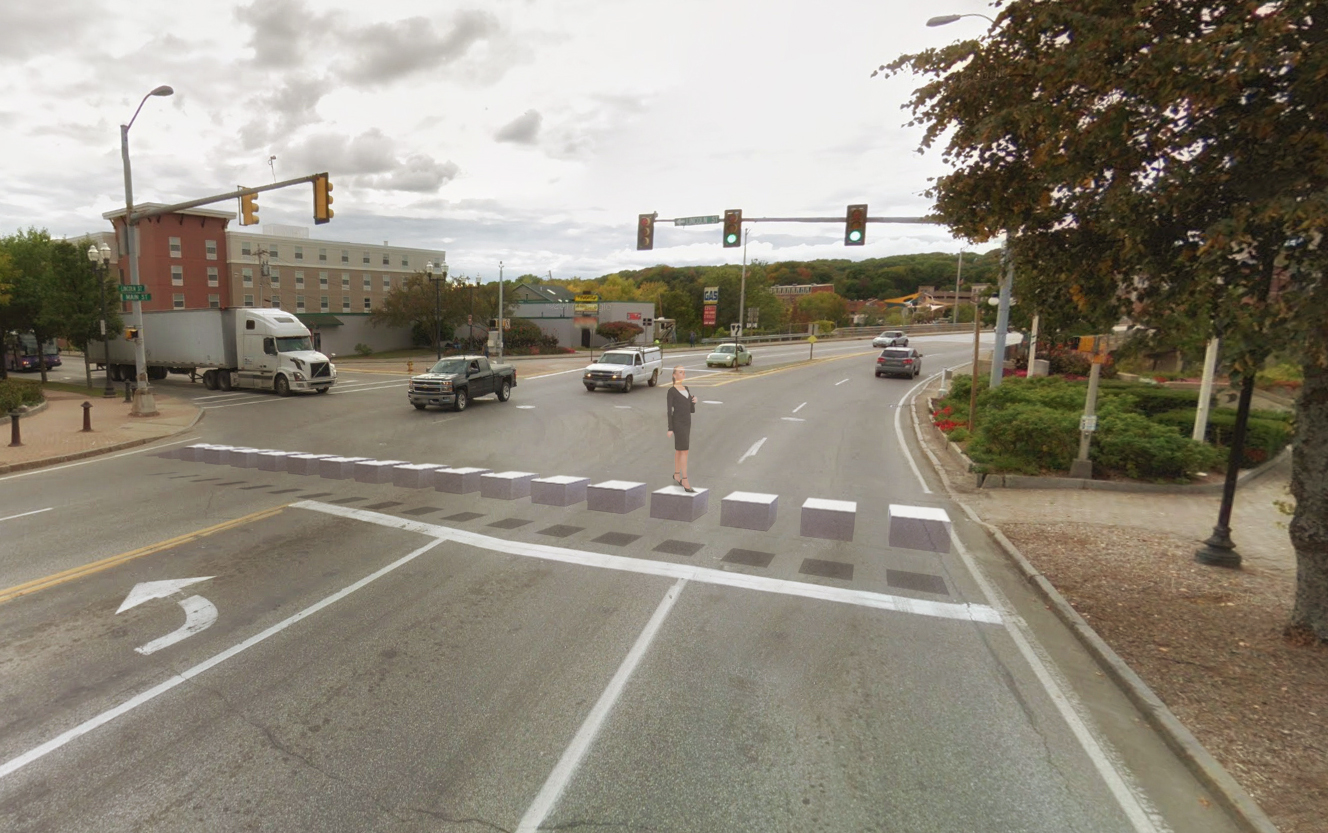 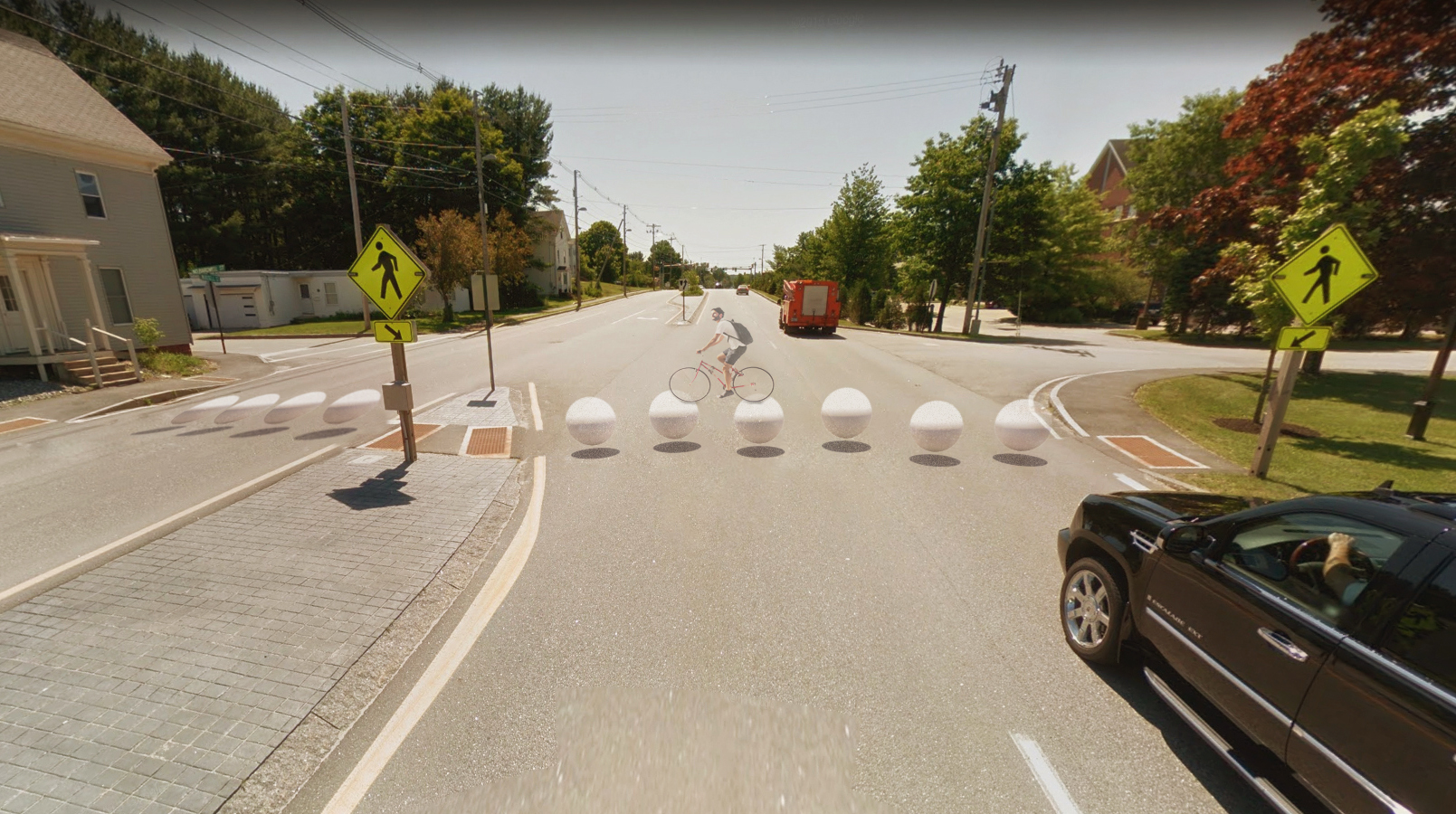 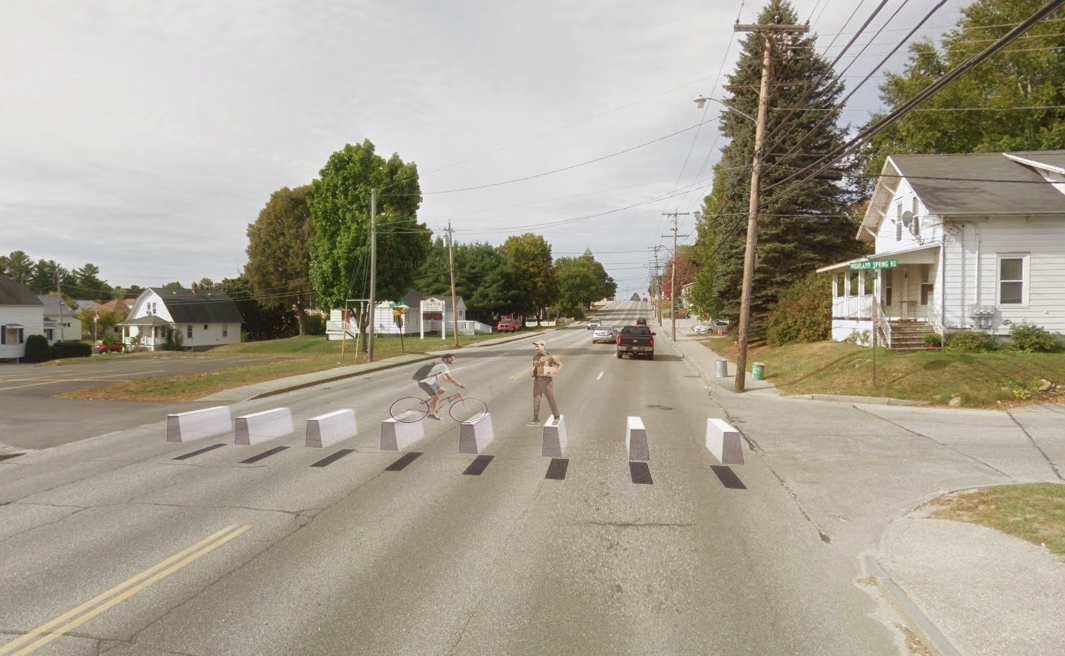 The goal of such a visual trick is not to alarm speeding drivers into screeching to a stop or swerving to avoid a perceived obstacle at the intersection. It’s meant to shake drivers out of a routine-related attention mode and take serious notice of what -or who- is on the road ahead of them. Anything that makes motorists stay alert and slow down is a positive measure that should be supported and replicated, given the fact that traditional safety signage and messaging is no longer making an appreciable difference.

Opponents of the design maneuver warn that the illusion of a floating barrier could be a hazard, but if a driver is unable to respond appropriately, it’s probably a sign that the person shouldn’t be behind the wheel, at least not at that moment.

This is not the first time that optical illusions have been used to prevent accidents:

Impaired, distracted, or negligent drivers continue to present a danger to pedestrians and other motorists. If you are injured by a speeding driver in or around the Lewiston-Auburn area, contact Fales & Fales, P.A. We will present your case persuasively during settlement negotiations, all the while remaining ready to go to trial. To schedule a confidential consultation, call 1-888-526-9408 today.